The unique style of the building can be attributed to its original designer, Robert Smith, a retired colonel of the British Army in India. This colourful eccentric was in fact an eminent architect, engineer and a very fine artist.

Colonel Robert Smith sold the family home in Bideford, N. Devon, in 1850 after the death of his wife and set up home in Paignton.

Another reason for the Colonels move to the South - West might have been that his sister Mary, who was the sole survivor of the family, had recently moved to Torquay, from the coastal town of Teignmouth.

It was surprising that Colonel Smith with his admiration of India did not return to the country. Instead it seems that he brought India to the South -West by designing an Indian/Gothic palace overlooking the bay.

Redcliffe Castle or Redcliffe Towers acquired its name by being constructed on a redstone cliff. It is said that this red-coloured sandstone might have reminded him of Delhi.

Overlooking Torbay’s sandy beach, the 19th-century Redcliffe Hotel has an indoor swimming pool and is set in 3 acres of gardens. A cooked-to-order breakfast is served in the restaurant, which boasts seafront views.

Each room is spacious and has a private bathroom with a hairdryer, and some rooms have coastal views. Free WiFi is available in all bedrooms.

Drinks served in the Redcliffe’s bar can be enjoyed in the casual lounge area or on the large sun terrace which overlooks the sea. In July and August, guests can also make use of a heated outdoor swimming pool.

Torbay town centre is within a 15-minute walk and Paignton Pier is less than 200 metres away. Free on-site parking is available. The fishing town of Brixham and Torquay’s beaches and coves are a 10-minute drive away. 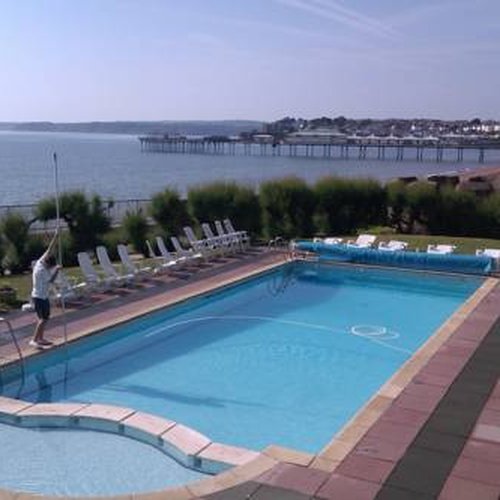